During the pandemic, the New York Stock Exchange took extraordinary steps to keep its markets open and operating smoothly. At the same time, it was quietly making major upgrades away from the trading floor.

Finding them is as simple as walking through the front door.

Visitors will see the first of these improvements as soon as they step off the cobblestones that line lower Manhattan’s Broad Street and enter the building’s redesigned main lobby. Those who have visited before will witness a stunning transformation. Those entering for the first time will be treated to a sleek, modern experience that marries the exchange’s past and its high-tech future.

A view of the NYSE’s redesigned lobby showing its two 24-foot video displays.

The space that greets visitors is designed to exist in concert with both the exterior of the Greek Revival style building and the recently renovated event floors above, which include the NYSE’s iconic boardroom, home to IPO celebrations, conferences and investor events.

“There is a cohesiveness of look and feel that was achieved by the materials and the finishes and the lighting,” says Jim Katsarelis, who manages NYSE building operations and led the 2-year renovation. “Technology also played a part.” 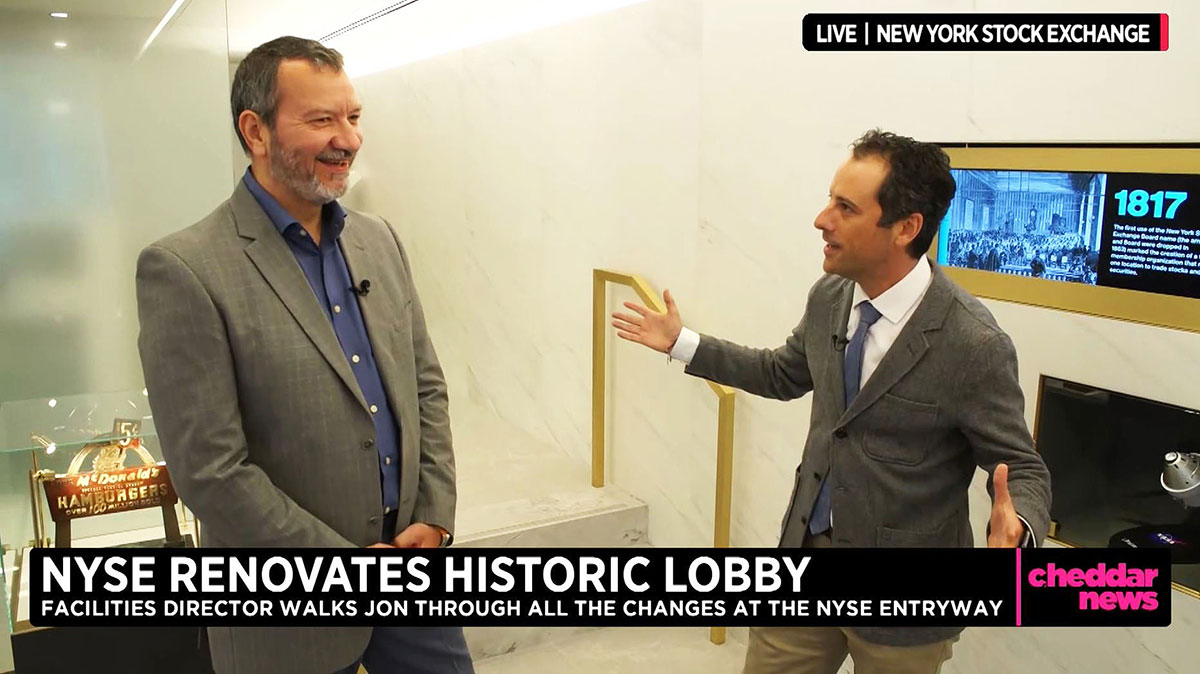 The NYSE’s Jim Katsarelis is interviewed by Cheddar’s Jon Steinberg about the redesigned lobby.

When it first opened to the public in 1903, the George B. Post-designed building provided more space and convenience for traders and better light and ventilation than the prior structure. The new renovations place a premium on the visitor experience. Two 24-foot-long video displays line one side of the lobby, guiding guests as they move through the expanse toward the elevator bank and the floors above. On the other side, smaller screens describe key moments in the creation of the modern NYSE. One even challenges guests with a trivia quiz that cycles through 100 distinct questions.

Glass-enclosed exhibits curated by the NYSE’s archivists bring to life the listed companies that sit at the core of the NYSE community. There’s a miniature version of NASA’s Orion Space Module, a project led by Lockheed Martin, and a NIO Founders Edition electric car. Items highlighting longtime NYSE issuers like McDonald’s, Coca-Cola and Campbell Soup Company welcome visitors as well.

The lobby plays a particularly important role for the NYSE. While news images tend to focus on its colorful floor traders, the exchange’s building at the corner of Wall and Broad streets is a hub of activity for the NYSE community, which includes more than 2,300 listed companies. 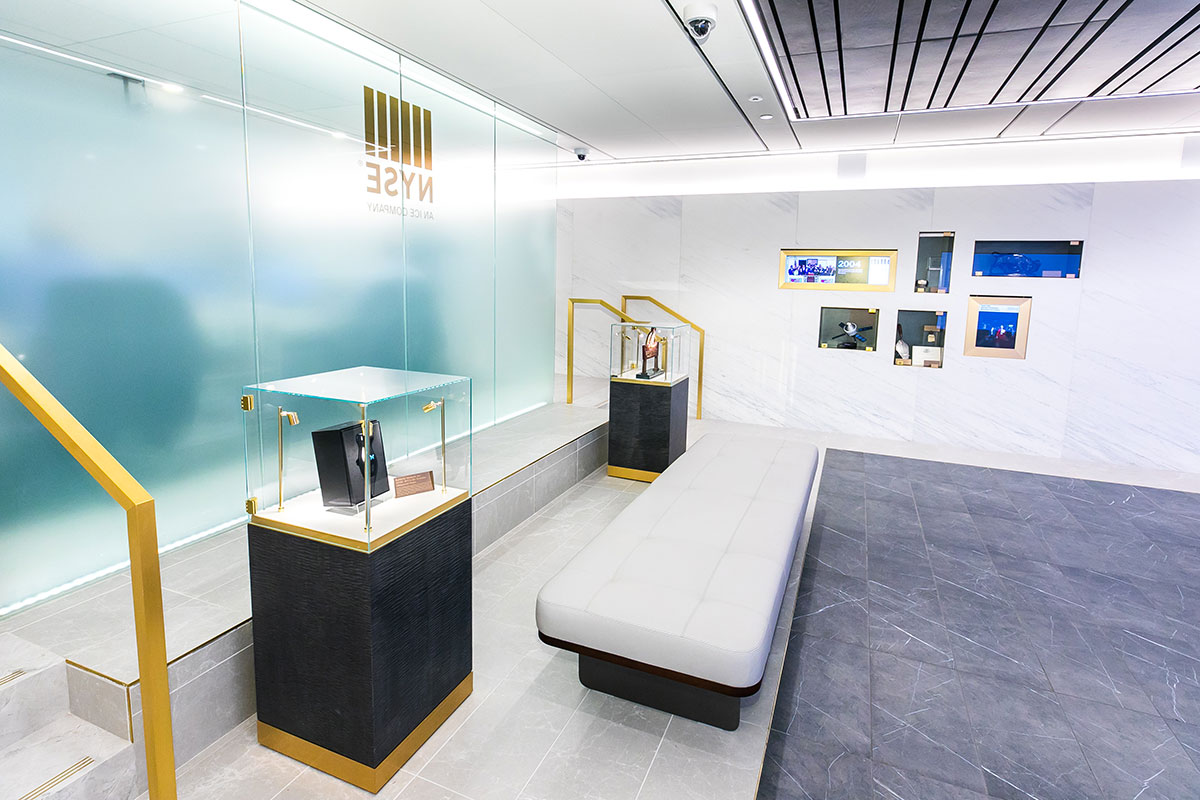 The entrance to the NYSE’s redesigned lobby featuring wall displays and freestanding exhibits.

Gifts from NYSE-listed companies Coca-Cola and NIO exhibited in the NYSE lobby.

As the reopening in New York and across the nation progresses, the flow of exchange visitors continues to pick up. Importantly, the gatherings they attend have been enhanced, with the ability to hold remote events developed during the pandemic creating a new normal that combines in-person and remote attendance.

“We’ll always have this hybrid, remote option,” says Tina Schippers, who with her colleagues managed about 2,000 NYSE events in pre-pandemic 2019. “People are always going to want to use the technology that we tapped into the past year.”

This will significantly extend the reach of NYSE celebrations and conferences, Schippers explains, reaching many more people than in-person events alone. Activity will ramp up further this summer before reaching a pandemic-era crescendo after Labor Day.

If the NYSE’s upgrades are substantial, the work required to get there was extraordinary. Katsarelis’ lobby renovation began prior to COVID-19 in early 2019, but construction started later that year and ran throughout the pandemic. In fact, the lobby itself has only just reopened, welcoming guests for the first time the week before Memorial Day.

A team of about 80 people from a dozen separate NYSE areas participated in the project. Because the lobby is located directly under the trading floor, work had to be done on nights and weekends to avoid impacting market operations. For example, more than 42 miles of old telecommunications cable were removed during construction, which routinely ran until midnight or 1 a.m.

Further, Katsarelis explains, since construction is not an activity that can be accomplished remotely, team members had to adopt new safety protocols to keep the project moving.

A trade confirmation slip from 1942 found during construction on the new NYSE lobby.

Their efforts did, however, yield some unexpected gems. Workers unearthed historical items that had somehow found their way into the building’s structure, including a remarkably well-preserved trade confirmation slip from 1942.

“We were able to get some pretty cool artifacts,” he says, “that literally fell out of the ceiling.”