Traders, guests and staff shared more than a few unique moments at the NYSE building in Manhattan’s Financial District during the two-week period, which included a rare outdoor opening bell ceremony and a birthday cake for the Marine Corps.

Kyndryl’s banner hangs on the NYSE facade the morning of its listing.

The action kicked off last Thursday when IT infrastructure services provider Kyndryl completed its spinoff from IBM, one of the NYSE’s longest listed companies. Kyndryl brought a large team to 11 Wall Street to celebrate the occasion, filling the exchange’s Board Room as the day began. Some attendees wore gray trading vests produced for the occasion as John Tuttle, the NYSE’s vice chairman and chief commercial officer, stepped up to the stage to welcome the crowd.

“Congratulations on the listing of Kyndryl!” Tuttle began, triggering thunderous applause that echoed off the iconic room’s 26-foot ceiling.

The next day, Santa Monica, CA-based Bird, known for its electric scooters and e-bikes, celebrated its own listing. Bird’s products were displayed on Broad Street outside the exchange building, allowing passersby an unobstructed view of the technology. Their message was shared on a blue banner on the NYSE’s six-column facade:

As the second week of November began, the area in front of the NYSE was completely transformed for Nextdoor, the San Francisco-based social network focusing on neighborhoods. A block of mock storefronts operated by real businesses was erected on the cobblestone street. Brooklyn Blooms distributed fresh-cut flowers. Black Seed Bagels offered visitors a nosh and Buunni Coffee provided something to wash it down.

In addition, Elio’s Quartet set the mood with live jazz and the ASPCA brought several dogs in need of a home, including two Great Dane puppies, playing in the sunshine.

The crowd on Broad Street had a rare treat coming. Nextdoor was preparing to ring the NYSE opening bell right in the middle of its outdoor neighborhood. NYSE President Stacey Cunningham stood beside Nextdoor CEO Sarah Friar and her team as the moment approached. At shortly before 9:30 a.m., they began ringing colorful, handheld bells in unison to open the trading session.

When asked about Nextdoor’s journey in a video interview with the NYSE’s Ryan Green, Friar summed it up in one simple word.

“Kindness, first and foremost,” she said. Traders and investors will be reminded of this each time they place an order. Nextdoor’s NYSE ticker symbol is KIND.

On Wednesday, the Campinas, Sao Paulo, Brazil-based team from CI&T arrived at the exchange, wearing red company T-shirts and ready to celebrate. The software services provider brought a truly global feel to the Board Room as CEO and Co-Founder Cesar Gon gave a moving speech to his team in a combination of English and Portuguese. 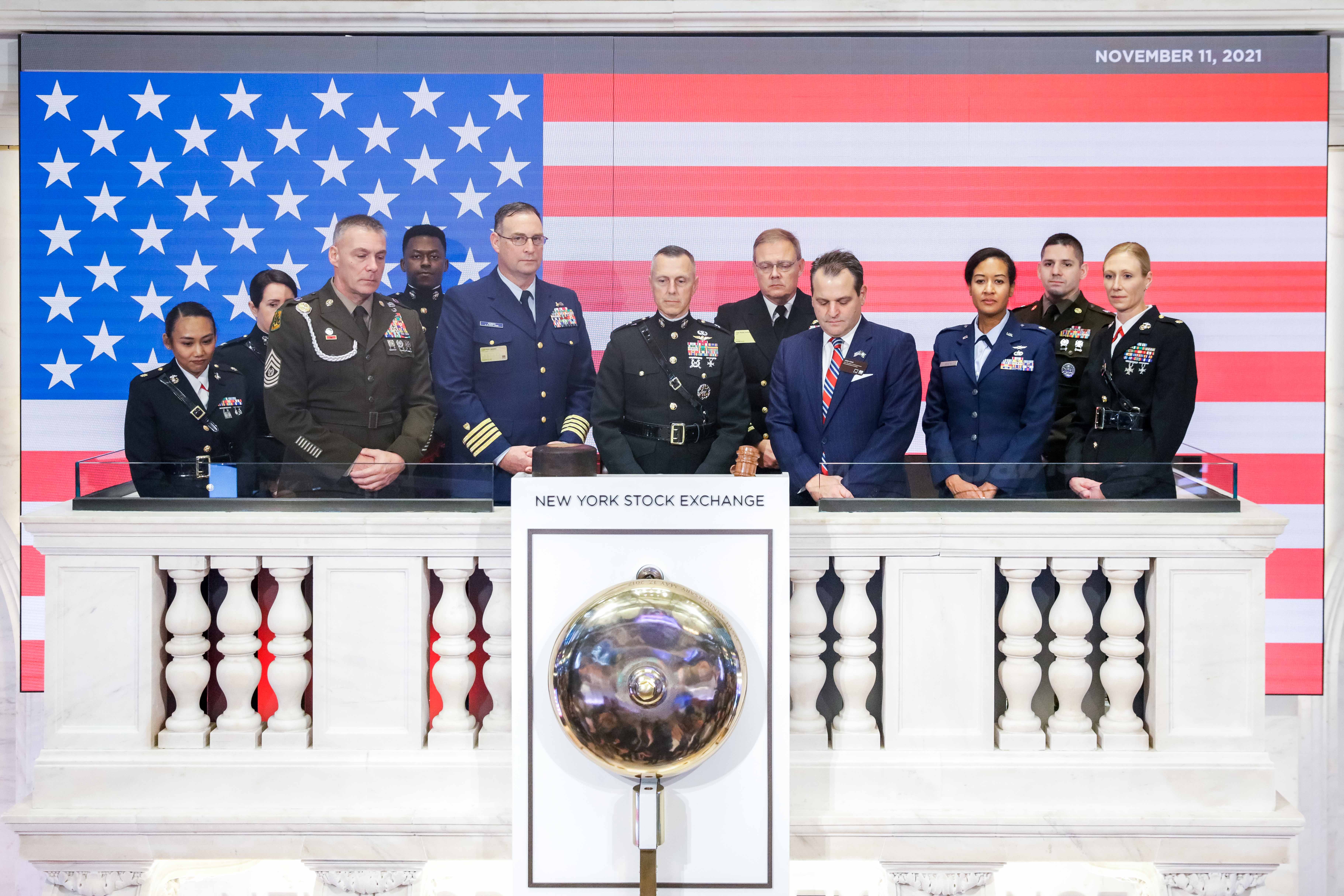 Members of the military participate in the Veterans Day moment of silence.

While tech listings were front and center during this period, there were other unique moments as well. On Thursday, the NYSE held a moment of silence in honor of Veterans Day, with representatives of the Army, Marine Corps, Navy, Air Force and Coast Guard present to mark the occasion. The contingent, led by Marine Brig. Gen. George Rowell IV, received a traditional “clap-on” in their honor from traders and exchange officials as they walked out onto the trading floor.

There, they shared a chocolate-iced sheet cake celebrating the 246th birthday of the Marine Corps, which was founded in Philadelphia on Nov. 10, 1775. The group then made its way to the bell podium for a two-minute moment of silence, triggered by a single strike of the NYSE’s famed brass bell.

Lehi, UT-based Weave Communications, a customer communications software platform for small and medium-sized businesses, also traveled to the exchange Thursday to celebrate its listing. The Weave team, led by CEO and proud Navy veteran Roy Banks, made its way down from the Board Room earlier than typical to join with the floor community for the Veterans Day ceremony.

The trading floor fell silent in a powerful tribute to America’s service men and women.

What It’s Really Like to Ring the NYSE Bell

Wildfires are raging across the western United States, destroying homes, commercial buildings and entire towns. A nation away, experts at Atlanta-based Intercontinental Exchange, known as ICE, and climate and ESG data provider risQ, headquartered in Boston, work to associated with such potentially disastrous events.