Floors Active Late in the Session

Published
July 16, 2021
Following the record-setting 40.1 million average daily volume (ADV) in the 1st quarter of this year, Q2 2021 options volume was the 2nd highest of all-time with 37.6 million contracts traded per day. Robust volume was driven in part by market anticipation of a potential earlier rise in interest rates and Fed tapering, as well as increased volume in options on new issues and continued activity in retail-focused stocks.

A growing percentage of Equity & ETF options volume in Q2 2021 was driven by newly listed symbols, which we define as any symbol with options listed in the last 12 months. This figure reached a high of 13.7% (5.1 million ADV) of total industry volume in June 2021.

Many of the top 10 newly listed issues in June were consumer brands with a strong retail following. We also saw several pre-deal SPACs within the newly issued category, representing 0.9% (349K ADV) of total industry volume in June. 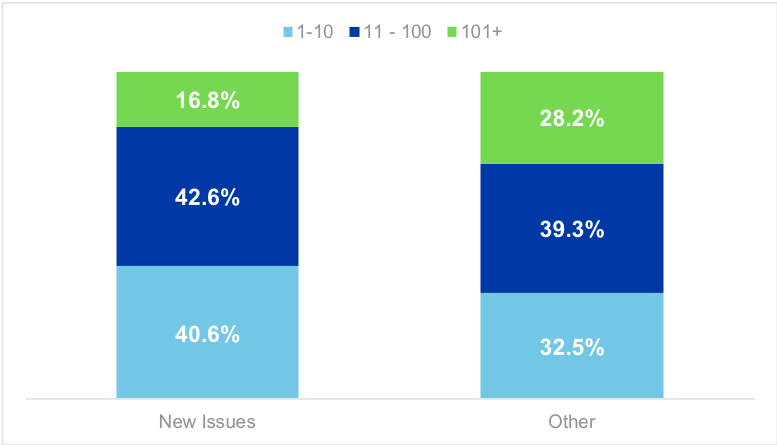 The NYSE Capital Markets team has forecast a strong IPO market in the second half of 2021. If this bears out, it should continue to provide the U.S. options markets with new issues, which in turn will support options industry volume strength for the remainder of the year.

Day 3 - After close of business, exchange regulation approves listing if the following qualifications are met:

Day 4 - Issue is certified with OCC

The Floors have continued to cater to larger institutional-sized transactions with an average transaction size just over 400 contracts in the first two quarters of this year. Smaller retail-sized transactions tended to dominate trading at the beginning of the day, with nearly 10% of total “electronic” volume (auction, complex, electronic) having occurred in the first 15 minutes of the day. Electronic volume trailed off the rest of the trading day before it picked up again towards the close. The average transaction size for electronic trades executed earlier in the day was 5.5 contracts , which size gradually increased to nearly 6.5 contracts per transaction by end of day. Floor volume tended to be slower than electronic volume shortly after the open and maintained a steady flow of volume throughout the trading day before it increased towards the close. Overall, transaction size increased throughout the day, driven primarily by the increased proportion of larger-sized Floor transactions. 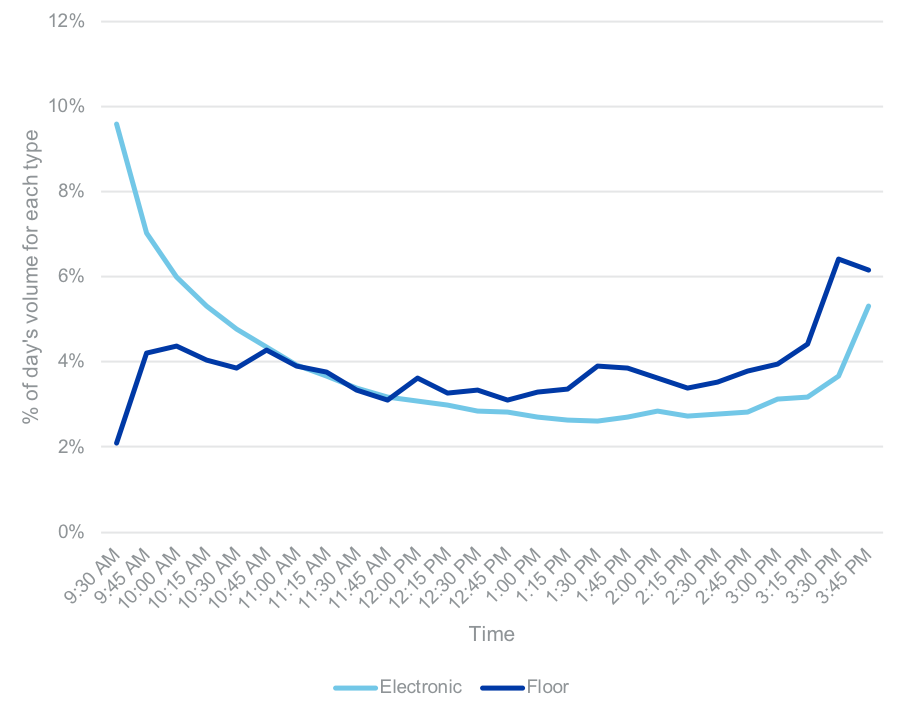 The most active symbols traded “electronically” were a mix of single stock names and ETFs. Despite the growth in new issue volume described above, only one new issue made the top 10 most-active list, highlighting the increased dispersion of market volume. In Floor trading, the most actively traded symbols were almost exclusively ETFs, with AAPL being the only single stock name in the top 10.

After-hours trading has been a larger piece of the total trading volume since the onset of the pandemic, with retail presence growing stronger and earnings announcements becoming less of a factor. In this post, we examine the impact of these shifting dynamics on after-hours price discovery and order behavior.

May 27
Earnings Announcements & Retail Participation: A deep-dive into after-hours trading »

The surge in market volatility and trading volumes since the onset of the pandemic in March 2020 has impacted numerous aspects of equity market trading. One less-studied area has been after-hours trading. After-hours has also seen changes in order flow trends and influences, and here we examine trends and shifts occurring in these sessions.

At the end of January, stock market news was everywhere from mainstream outlets to Saturday Night Live, as social media seemed to drive unprecedented trading interest in a few stocks. AMC Entertainment (AMC), BlackBerry (BB), GameStop (GME), and Nokia (NOK) received the most attention and saw their combined options ADV increase from 68K contracts in Q4 2020 to over 426K contracts in Q1 2021 − a 523% increase. Overall multi-list options ADV increased 31.3% in that same time frame.