We previously discussed the impact of volatility on listed options market quality in 2018. While metrics such as indices and trading ranges can provide some measure of volatility, we are introducing quote volatility (QV), a quote-based metric as a more specific, and more flexible, measure of price volatility in the market.

We have found that in times of market volatility, the QV metric correlates with real-time changes to execution venue selection, and may be a worthwhile indicator for considering execution scenarios. Likewise, QV may also be a useful metric for determining when the market has returned to normal conditions following volatility-inducing news events.

The QV metric is calculated using second-to-second “quote returns.” This quote return is calculated by averaging the midpoints of all NBBO updates for a security within each second of the day from 9:35am to 4pm, and then calculating the percentage rate of return of these average quote midpoints from one second to the next. The variance of returns are then calculated in aggregated time periods (e.g., 5-minute buckets) and annualized from seconds to 6.5-hour trading days to 252 trading days in the year. Finally, we take the square root of the annualized variance in the aggregated periods, creating the quote volatility metric.

Application of QV: Volatility in December 2018

Markets volatility spiked in December 2018, presenting opportunities to apply the QV metric. The VIX had an average closing value of 24.95 in December. However, that month was significantly more volatile between December 17 -31 than it was December 1-14; the index increased 35% (21.08 to 28.44) from the first half of the month to the second half.

In our analysis, we focused on the most active names and measured the QV metric across all components of the S&P 100. We found that the metric increased 24% (23.06 to 28.62) from the 1st half of December to the 2nd half1. While QV increased sharply with the Fed rate decision on December 19, we found that volatility remained elevated throughout the second half of the month. 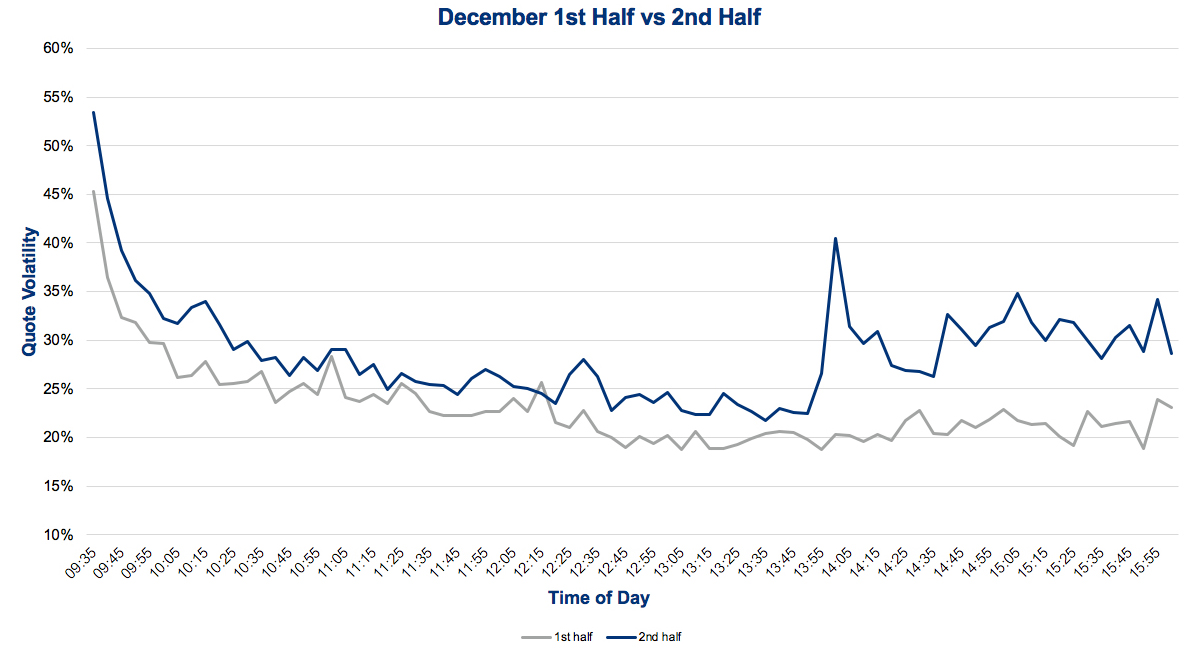 QV Case Study: A breakdown of the Fed Rate Decision on December 19 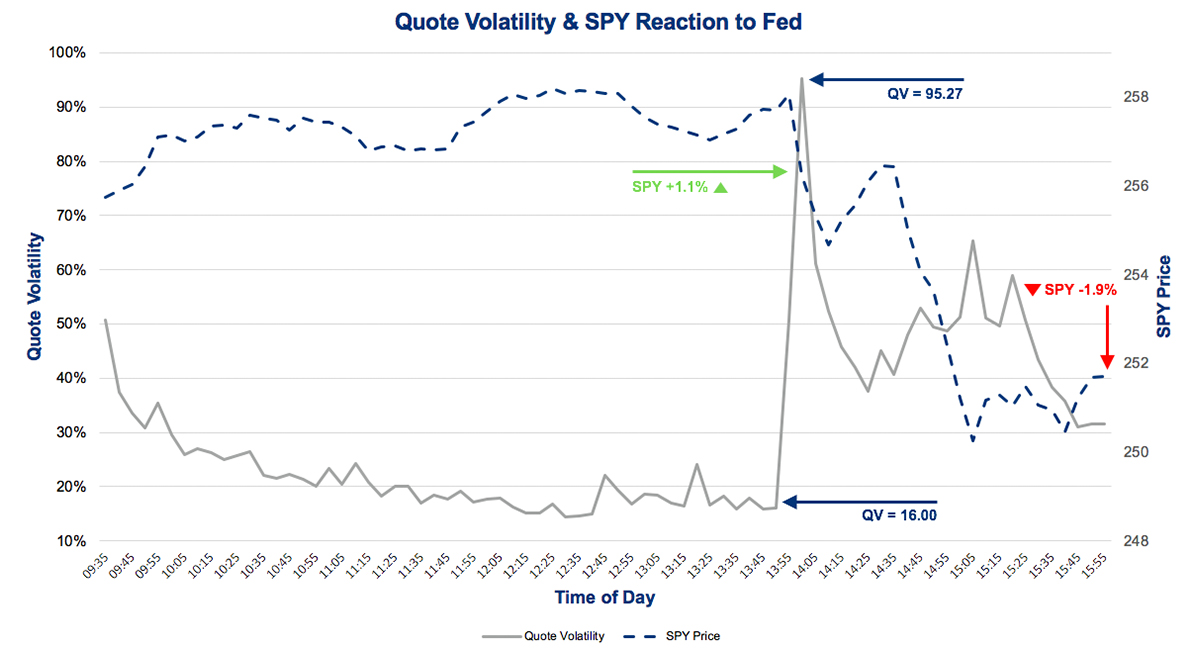 As expected the QV metric was highly correlated with market volume, and offered insight into execution venue selection. On December 19, market volume leapt at 2pm with the news event. As with QV, trading volume remained high as the market continued to fall throughout the afternoon. The extent of this volatility increase also impacted trading venue selection. Ten minutes before the announcement, TRF market share was 43%; immediately following the announcement, TRF share dropped to 22% and remained around 25-30% for the rest of the day.

We believe the QV metric may be a highly relevant volatility indicator for execution scenarios. As seen in the December 19 example, this metric can help correlate with changes such as execution venue selection and may be useful to determine when the market has returned to “normal” conditions after a news event.

1 For December quote volatility analysis, Dec. 24 was excluded due to the shortened trading day. It was a highly volatile day, but the difference in timing for a shortened day on the 5-minute intervals would have a significant impact on the analysis.

We also omitted 2 symbols on separate days in which there was a period in the day that they were either halted or had unusual quoting activity for several 5-min intervals; inclusion would significantly skew overall results. The exclusions were NVDA on Dec. 11 and LOW on Dec. 12.