This past year, 2019, was the second highest volume year on record for options; volume was off only 3.7% from 2018’s record-setting year. While options market conditions were milder at the end of 2019 than the previous year, there were some unusual movements. As shown below, dividend-related activity played a role in market conditions.

Divergence in Penny vs Non-Penny Names

In aggregate, options quoted spreads were mostly stable with little fluctuation throughout 2019. However, splitting our quoted spread analysis by Penny Pilot (PP) and Non-Penny Pilot (NPP) symbols reveals a more interesting story. Quoted spreads in NPP symbols leapt in December to $0.31 from $0.24 in the prior month. When adjusted for the price of the option, spreads remained stable.

Our data source captures the quoted spread in an option at the time the option trades. Since spreads increased in dollar terms but not notional terms, this suggests an increased share of volume in more-expensive options. Factors that could make options that traded more expensive include 1) higher implied volatility, 2) longer term maturity, and 3) deeper in-the-money (ITM) options.

Reviewing these factors, we find that volatility remained subdued in December. 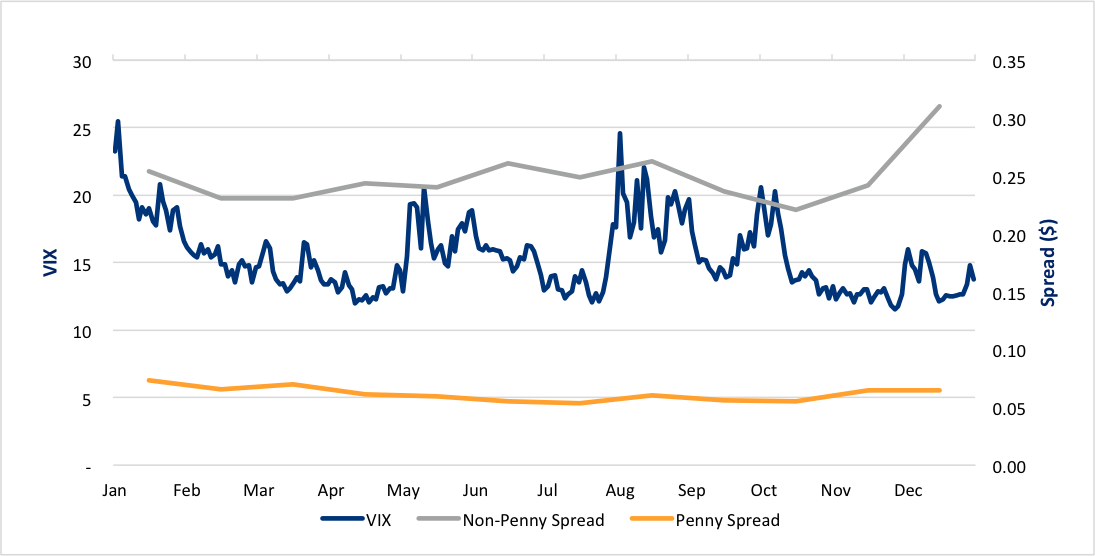 Also, the term maturity of options traded did not appreciably shift to longer-dated options.

That leaves the “moneyness” of the options traded as the most likely explanation for the wider nominal quoted spread; deeper ITM options would have more intrinsic value and therefore a higher price. There were certain days in December when unusual market share and volume shifts suggested an increase in “dividend spread” trades, which we recently reviewed here. Dividend spreads usually involve deep ITM calls traded in large volumes, and on these notable days in December, market share spiked on PHLX and BOX, exchanges where dividend spread strategies are incentivized.

Supporting this theory, we see that ITM calls traded as a share of all call trading increased throughout the year on all exchanges, but dramatically more so on PHLX and BOX towards the end of the year.

We hypothesize that the increase in ITM call trading is due to a larger amount of open interest in January expiry options. The January 17, 2020, expiry options have a significant amount of open interest due to being listed for at least 2 years as leap options, and thus trading for longer than any other option expiry month. With a strong bull market stretching well beyond just the past 2 years, many traded calls that were out-of-the-money (OTM) or at-the-money (ATM) when the position was opened would now be deep ITM. As they approached their maturity date at the end of the year, the time value of the options decreased and became more attractive plays for dividend spreads.

With a sharpened lens specifically on January 17, 2020, expiry calls, we confirmed that there was outsized trading in January ITM calls that grew throughout the year. For the purposes of this exercise, we defined ITM calls as being at least 5% ITM compared to the spot price, so a fair amount of January ATM calls were also ITM. Trading in these January ATM calls increased substantially.

January Expiry Calls as % of All Options Volume

In December, quoted spreads in Non-Penny Pilot Symbols widened significantly in dollar terms, but not in notional terms (basis points). This happened because trading of deeper ITM calls increased from Dividend Spread activity. Dividend spread trading occurs throughout the year, but activity increased at the end of the year due to widespread ITM call open interest in January 2020 options.