The maturation of the enterprise cloud, as well as the security it demands, was a main focus of Oracle’s OpenWorld conference.

The Oracle (NYSE: ORCL) OpenWorld 2018 event in San Francisco was all about the digital trends transforming business, and seeing some of the new solutions driving that change.

The big industry changes included heightened efficiency and new cybersecurity risks, along with some unexpected obstacles that have emerged in recent years.

As executives from a broad range of industries took the stage in Moscone Center, other concerns became clear. Experts also spoke about the need to maintain consumer trust in digital services. And executives shared the challenges they've faced gathering data from disparate sources and turning it into actionable insights.

One thing everyone agreed on is that customers of all stripes are looking for greater speed and agility. "The high performers of tomorrow — what we call the "epic disrupters' — are going to be nimble, agile enterprises that use their scale to outperform other businesses," said Adam Burden, global lead for advanced technology and architecture, Accenture (NYSE: ACN). As Oracle CEO Mark Hurd said in his keynote, "The cloud is irrefutable; it's foundational. We're only still debating the speed at which things get done."

Migrating, Safely, to the Cloud

The growing centrality of cloud technology was front and center at OpenWorld. Companies migrating data from legacy systems into the cloud continued to feature prominently at this year's conference, but the tone had shifted. As one participant put it, "Our digital transformation is no longer just a strategy; it's a necessity."

But that migration isn't without its obstacles, noted Michael Dearen, managing director, corporate administrative solutions team, FedEx (NYSE: FDX). "We found that it's often impossible to get data in common and usable formats," he lamented, before explaining how the company has found new ways to share data in meaningful ways, all around the globe.

The Oracle Autonomous Database promises to continuously patch, provision, tune and upgrade itself. Oracle Chairman and CTO Larry Ellison added that it continues to act as a “force field” to protect the next-generation cloud.

Launched in 2017, the Oracle Autonomous Database promises to continuously patch, provision, tune and upgrade itself. Because of these autonomous capabilities, Hurd noted that the database will have less than 30 minutes of downtime per year. Oracle Chairman and CTO Larry Ellison added that its Gen 2 Cloud acts as a "force field" to protect customer data, automatically responding to and blocking cyber attacks.

Noting how many major companies and government agencies are moving to the cloud, Ellison was quick to sound the alarm. "Cloud defenses are still just not good enough — not even close. If the most security-conscious among us have been successfully attacked, we still have a big problem." To that end, Ellison touted Oracle's acquisition of San Francisco-based DataFox, a cloud-based artificial intelligence data engine for high-profile clients such as Goldman Sachs (NYSE: GS).

OpenWorld also featured industry leaders weighing in on many of the key cybersecurity issues facing companies and governments around the world.

On one panel, Oracle's chief corporate architect and former directors of the U.S. Central Intelligence Agency and the British Secret Intelligence Service discussed how to protect markets and nations from malicious hackers. They explained the new digital walls being built to stem the flow of information and protect access to markets. Also on the panel, former Secretary of the Department of Homeland Security Jeh Johnson said that he has seen security threats worsen in the years after Sept. 11, 2001, and noted that hacktivists are more skilled at breaching sensitive systems than ever before. Sir John Scarlett, former chief, British Secret Intelligence Service, added, "At the end of the day, you aren't able to protect everything."

In this environment, public-private partnerships are essential to the Department of Homeland Security because, as Johnson explained, "Cybersecurity threats will continue to get worse before they get better."

To address some of these concerns, Oracle mentioned that in 2019, it would offer the Oracle Autonomous Transaction Processing Database on dedicated infrastructure, which will enable companies to deploy essentially a dedicated private cloud-like environment on Oracle Cloud. "You can isolate yourself and have your entire perimeter sealed off by our cloud control computers," Ellison said. 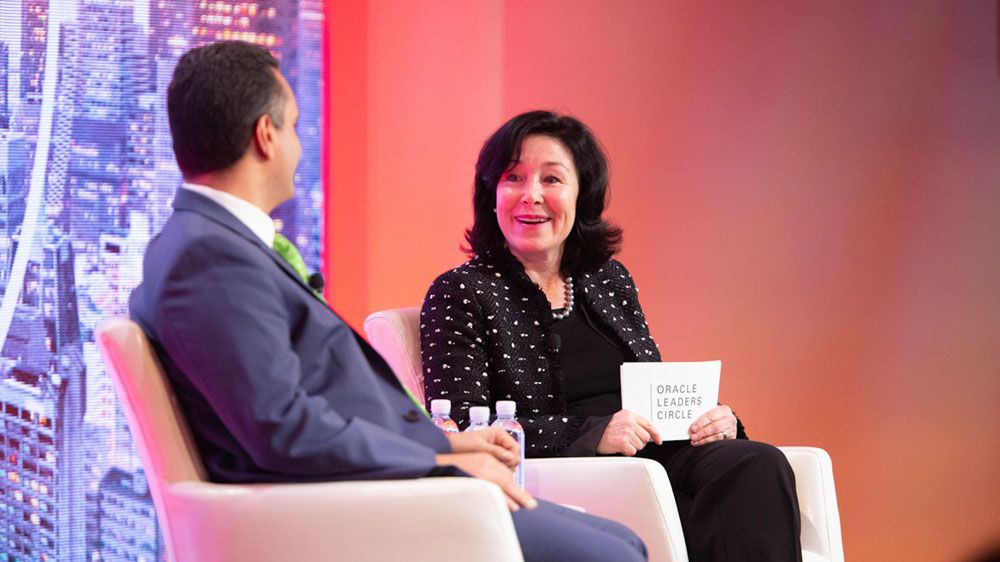 The Next Industrial Revolution

One OpenWorld watchword was "Industry 4.0," or "Manufacturing 4.0," which is the concept of connecting nearly every aspect of a company's research and development, supply chain and end product. This new cloud-enabled phase of interconnected production promises a way to ramp up the maturity curve faster by applying new data to a manufacturer's predictions, features and products.

With the rise of rapid prototyping and mass customization, Infosys (NYSE: INFY) Associate Vice President Raghu Boddupally noted that product personalization is now possible at a price that can be competitive with mass-produced goods. According to Boddupally, the technology is available and ready, and the implications of the emergence of Industry 4.0 appear across industries, pointing to increased efficiency, whether that means less down time in oil drilling, or less energy wasted due to the wider adoption of smart home devices.

Those changes are just the tip of the iceberg, everyone agreed. And as the pace of production increases, so will computing capability. As Accenture's Burden put it, "The pace of technology change will never again be as slow as it is right now."